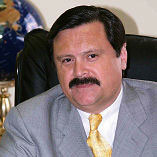 Mr. Garcia has led an active civic, legal and political career. He was born in Midland, Texas and grew up in Dallas, Texas. He received his B.A. in Political Science from the University of North Texas in 1980. In 1983, he obtained his Doctor of Jurisprudence degree from Texas Southern University in Houston, Texas. In 1982 he won a scholarship to study at the El Colegio de Mexico in Mexico City.
He obtained a Masters degree in International Relations. Domingo Garcia is a former Mayor Pro Tem for the city of Dallas and State Representative for Texas. In addition, he has been an editorial columnist and a successful trial lawyer for twenty three years.

After graduating from law school, Mr. Garcia worked as an intern in the District Attorney’s office in Houston, Texas. In 1983 he established his own law firm, The Law Office of Domingo Garcia in Dallas, Texas. He has tried numerous criminal and civil cases. Currently, he primarily focuses his practice on personal injury, wrongful death, employment law and governmental relations cases.
In 1995, Mr. Garcia won a 1.1 million dollar verdict for a man who had been hit by a drunk driver. He has won numerous settlements and verdicts in excess of millions of dollars. In 2004, he obtained a SIX MILLION DOLLARS ($6,000,000.00) settlement, one of the largest of its kind in the country, in the case of Esperanza Alvarado, a 14 year old girl who was electrocuted in an apartment swimming pool. For more information, check out our results page. In 2007, Mr. Garcia obtained over $23,000,000 in verdicts and settlements for his clients. He has won multiple high profile cases (see results).
He is a member of the American Association of Justice, State Bar of Texas, and the Northern, Southern and Western Federal Courts of Texas. In addition, ever since Mr. Garcia started practicing law, he has donated his time and talents to a legal clinic in West Dallas to provide legal services to the poor.

Mr. Garcia believes that public service is the duty and responsibility of every American. He has served as a precinct chairman, campaign volunteer and voter registrar.
In 1988 Mr. Garcia was elected to the National Democratic Committee where he served for eight years. He was on the executive committee and was chairperson of the Latino caucus. In 1991, he was pro-active in the political fight to create single-member districts in Dallas. He ran for the Dallas City Council, was elected, and served from 1991 to 1995. In 1993, Mr. Garcia became the first Latino ever elected Mayor Pro Tem for the city of Dallas.
He ran for Mayor of Dallas in 1995 and despite a strong effort, lost his bid. In 1996, he ran for the Texas legislature and was elected. He served in the Texas Legislature from 1996 to 2002. As a representative, he served on the criminal jurisprudence and Judicial Affairs Committees. He passed numerous bills to help students go to college, prevent dropouts, as well as bills for law enforcement and civil rights.
On April 9, 2006, Domingo was the key leader and organizer of the largest march in Texas history, when over 500,000 people gathered in downtown Dallas to support comprehensive immigration reform.
Mr. Garcia is currently the General Counsel for LULAC, the nation’s oldest Latino civil rights organization. He is the founder of the Phoenix Project, a drug treatment program for youth. He has established the Domingo Garcia scholarship at the University of North Texas, sponsors the ATLA student law organization at Texas Southern University and created an endowment for law students at TSU's Thurgood Marshall School of Law.
Journalism Career Mr. Garcia served as a weekly editorial writer for the Dallas Times Herald where he wrote on current events and Latino issues. He is currently an editorial writer for Al Dia, Dallas' largest Spanish newspaper. He has been quoted in numerous national papers such as the New York Times, The Washington Post, the San Francisco Examiner, and the Associated Press. He is a regular guest on local, state and national radio and television shows and provides political commentary for WBAP 820 AM in Dallas, Texas.
Awards and Achievements Mr. Garcia has won numerous awards and recognitions. The following is a brief list:

Mr. Garcia is a highly demanded public speaker on civic, political and Latino issues. He is a regular speaker for the U.S. State department on issues of democracy and municipal affairs.
He has spoken at numerous local, state and national events. However, his favorite audiences are students at public schools and universities. He is a speaker at several schools every year.
Mr. Garcia has traveled throughout the world on both business and pleasure. He has visited over 74 countries in Central and South America, Europe, Asia and Australia.